Some might say there’s not much to think about when designing or planning a shower or a bathroom as a whole. We tend to disagree since even the most minimalist of shower designs require careful consideration and are actually more complex than they seem. Decisions have to be made regarding all sorts of details such as the type of materials used, the color palette, the layout and even the actual location and placement. If you could re-image your walk-in shower right now, how would it look like? 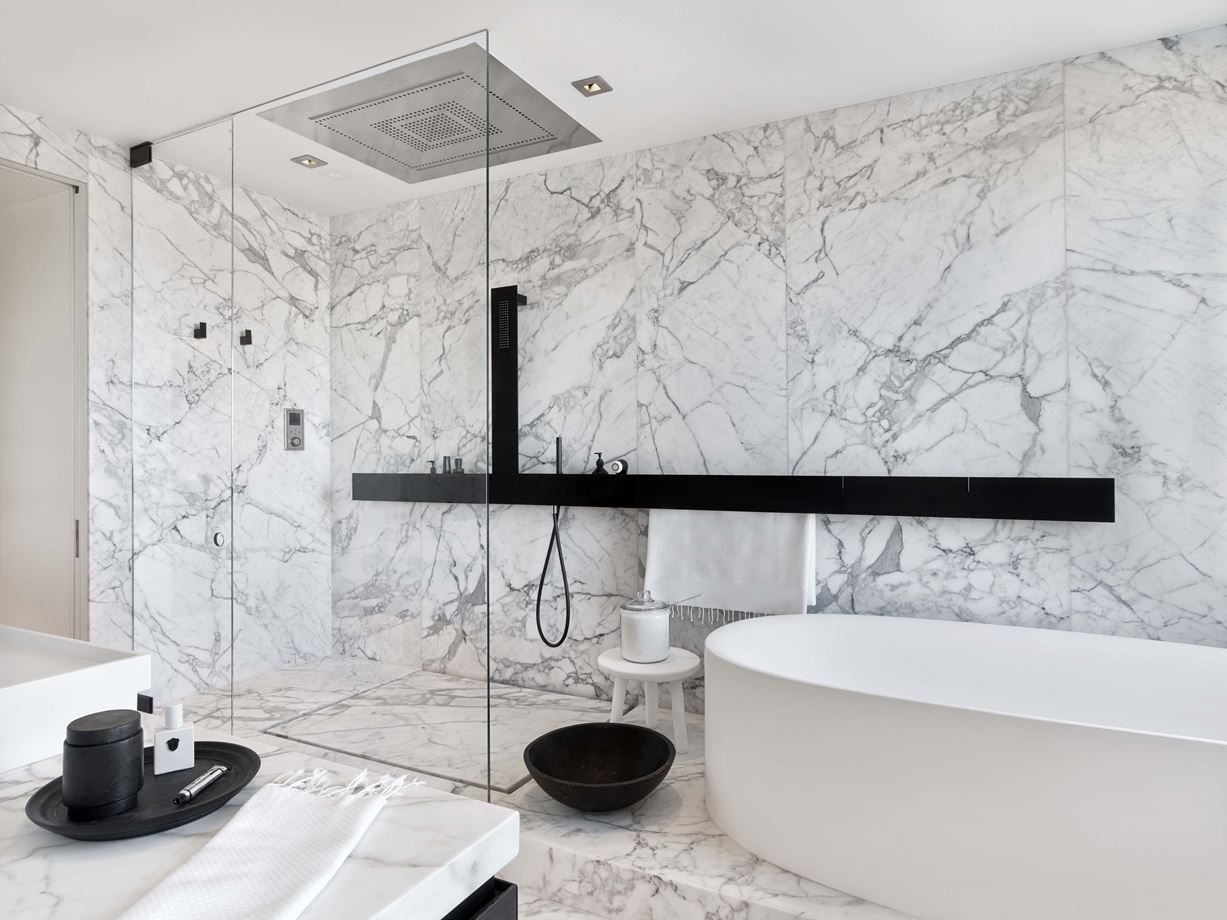 Marble never goes out of style and is a good option for a lot of walk-in showers because it looks elegant without overpowering the decor. Also, each slab of marble has a unique pattern and that gives it lots of character. This stylish marble bathroom was designed by studio CCS Architecture. 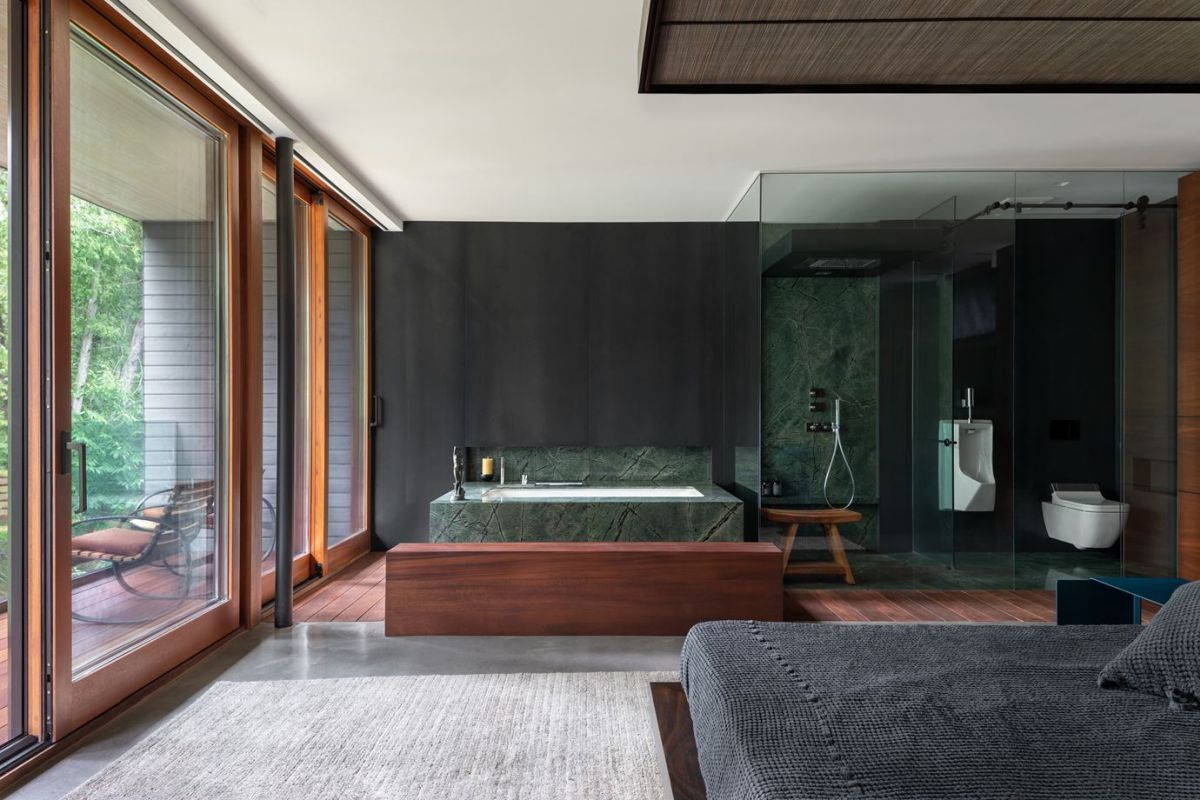 Lately, a new trend has emerged, where en-suite bathrooms are actually part of the bedroom itself, with glass enclosures separating the two spaces. The design is not for everyone but is definitely an option worth considering. Let this design by Trevor McIvor inspire you. 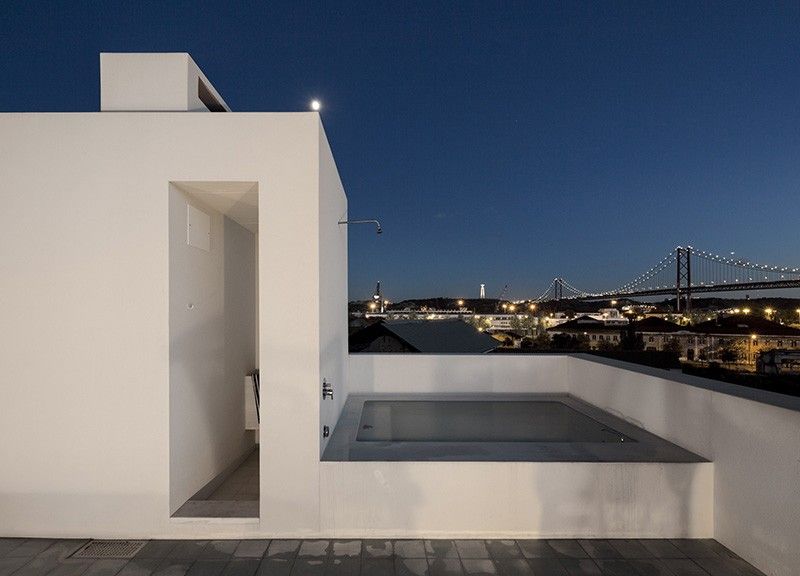 That’s right, this shower is situated on the roof of a building. It’s unusual but it’s also pretty amazing. The view is definitely impressive so imagine being able to enjoy this panorama while taking a shower late at night. It’s a sense of freedom and excitement which we can’t quite describe. This was a project completed by José Adrião Architects. 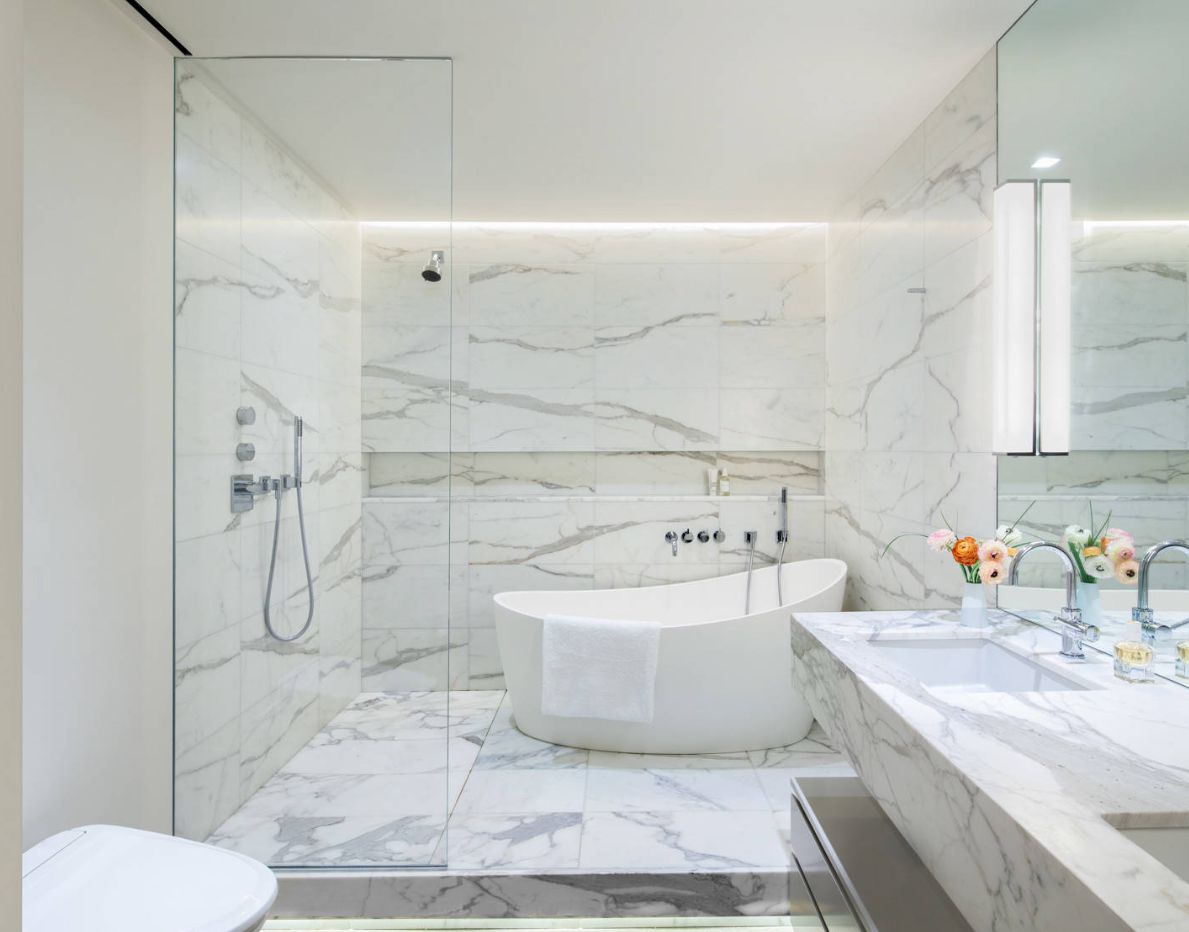 The tub and shower combo is quite common, being appreciated for its space-efficiency. There are numerous ways to tackle this sort of design and usually a designer would work with what they have. This is a fairly spacious shower setup, with a handy wall nook by the tub and white marble everywhere. 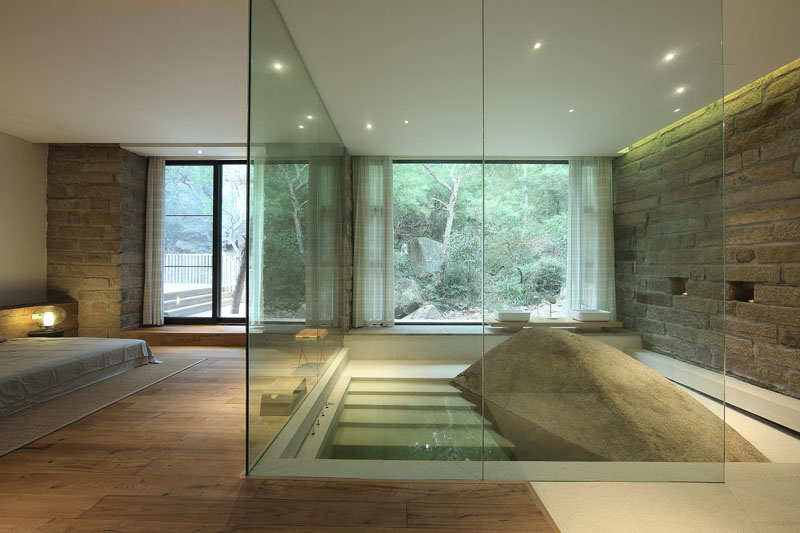 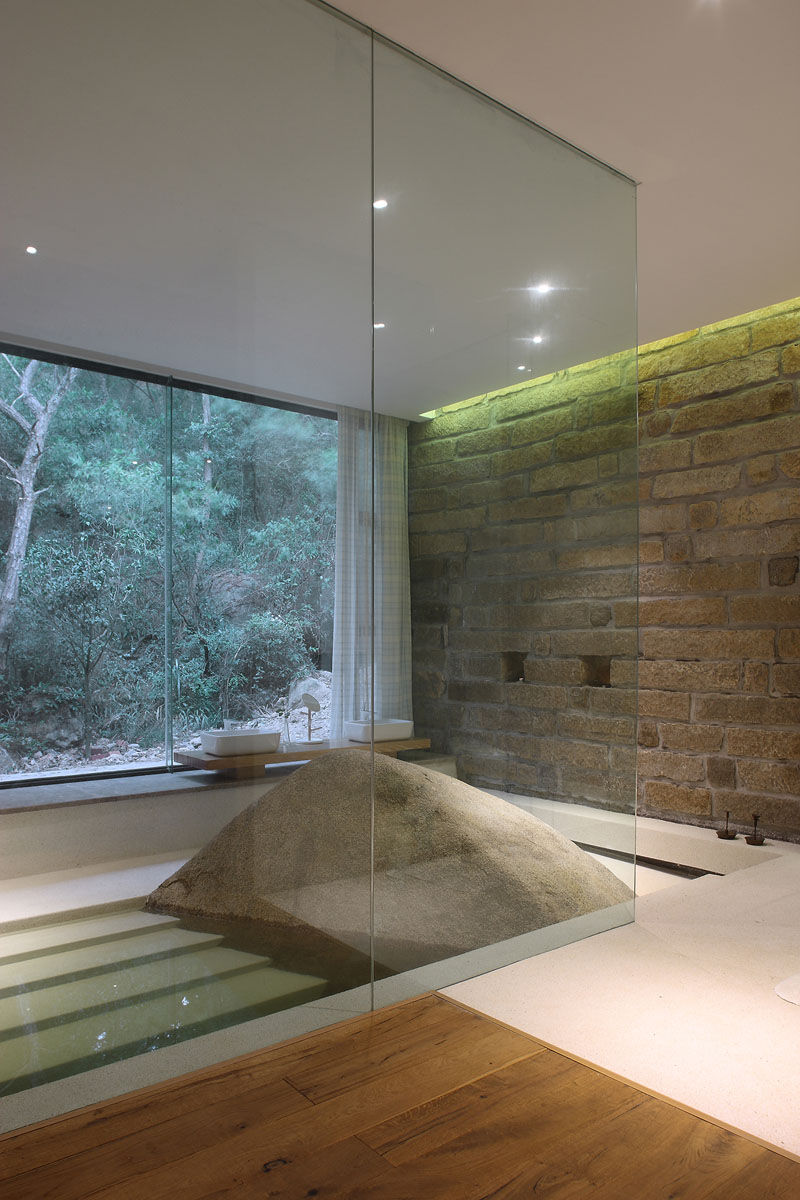 Many contemporary interior designs focus a lot of bringing the outdoors in and it’s usually the social areas that get to express that best. Of course, that doesn’t mean the rest of the spaces should be ignored. One of the best examples of a bathroom infused with nature-inspired beauty is this one. There’s a big boulder in this shower and it looks really cool. This was a project done by FM.X Interior Design. 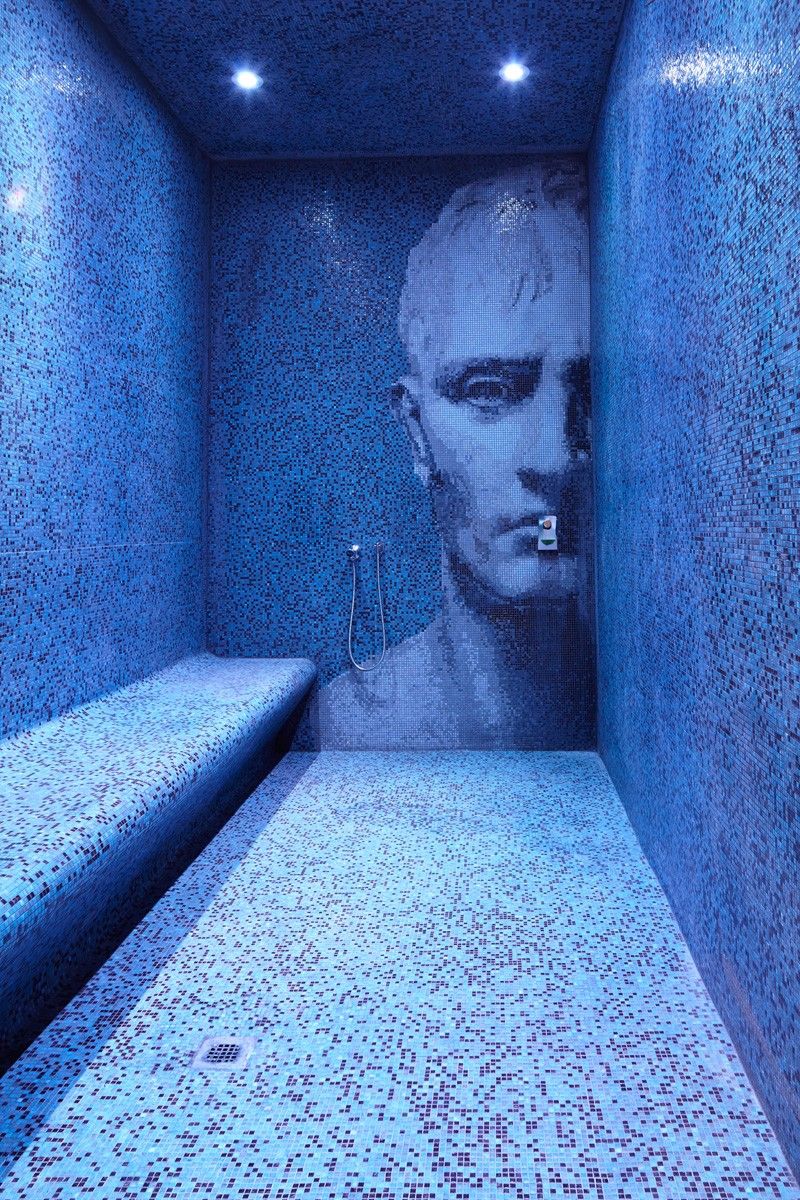 Murals are also really cool and you can do something amazing with that when designing the shower. This idea from Prototype Design Lab could be your source of inspiration. Adapt the design to the resources that are available to you and pick a theme that suits you and your home. 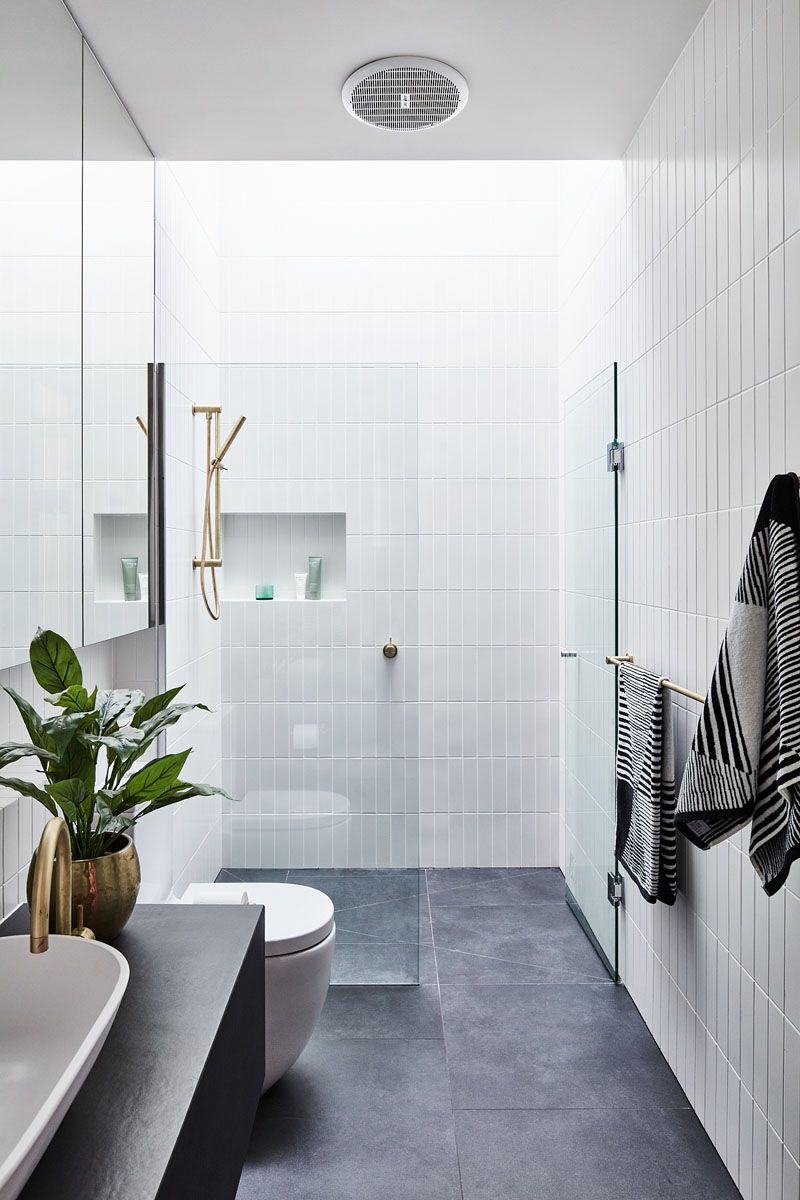 Small and simple doesn’t equal boring and this stylish walk-in shower designed by Auhaus Architecture proves it. The transparent glass doors ensure a nice spatial continuity and help the bathroom appear bright and airy. The small wall nook is very practical and maintains a minimalist vibe which suits the room perfectly. 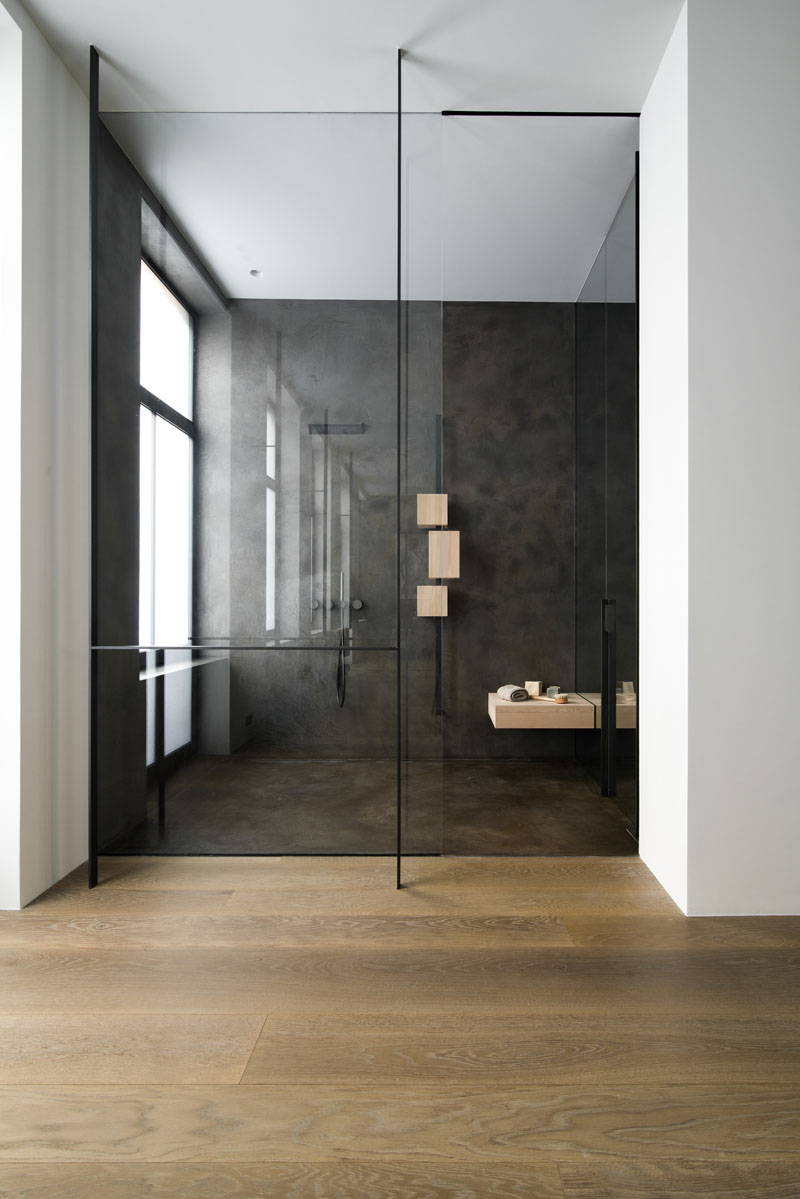 If you want the shower to stand out and have its own identity rather than blend into the bathroom, that’s easy to achieve through color. Light colors are great at making spaces appear larger but in this case a dark nuance would give the shower more depth and dimension. This walk-in shower designed by studio K2A could give you some ideas in this sense. 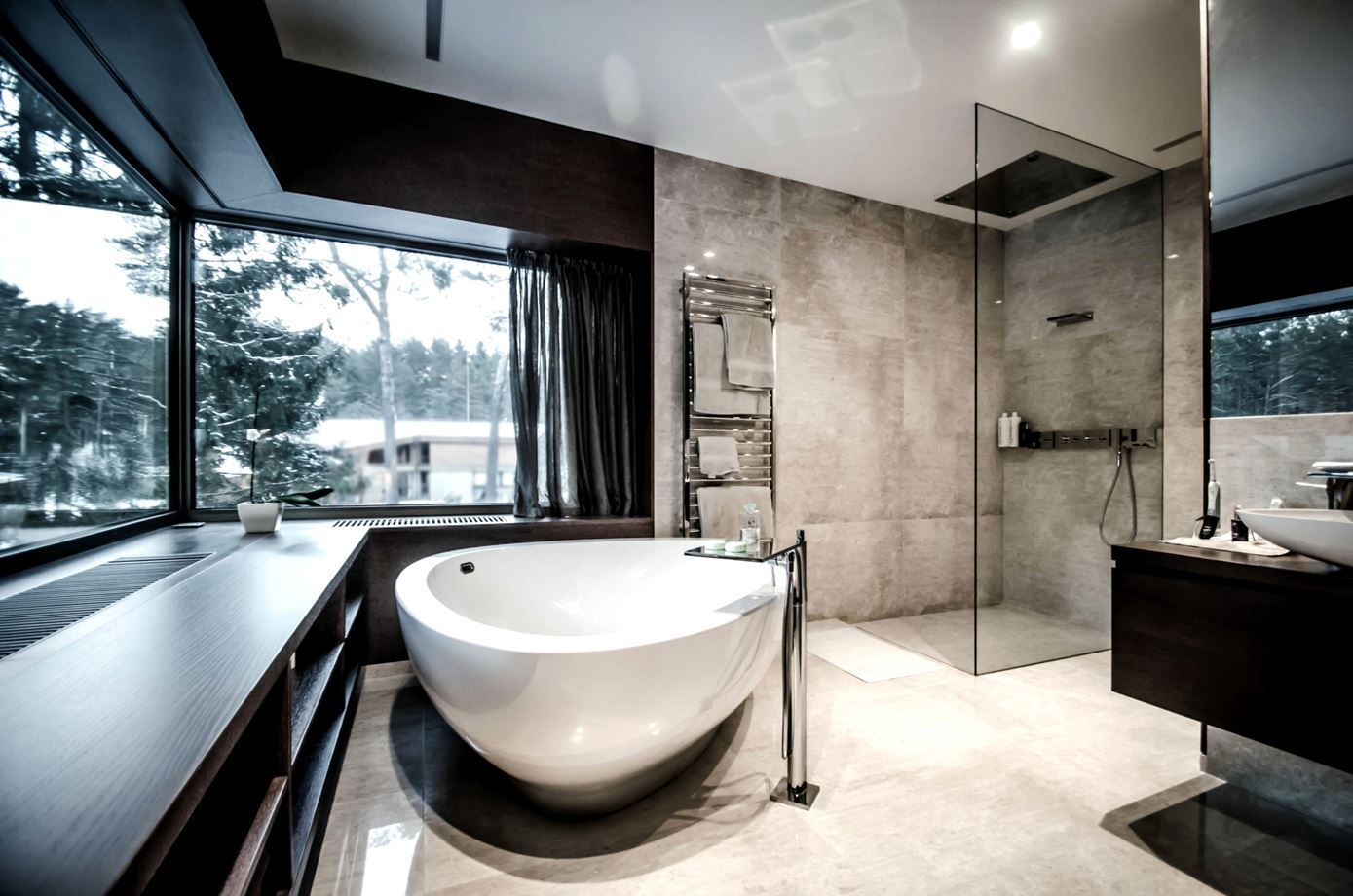 Fitting both a tub and shower in a bathroom can be tricky, especially when the layout or the proportions of the room don’t really help. For this bathroom studio Devyni Architektai chose to place the walk-in shower in the far right corner, with large windows on the opposite side, a low shelving unit along one of the walls and a freestanding tub sitting towards the center of the room. 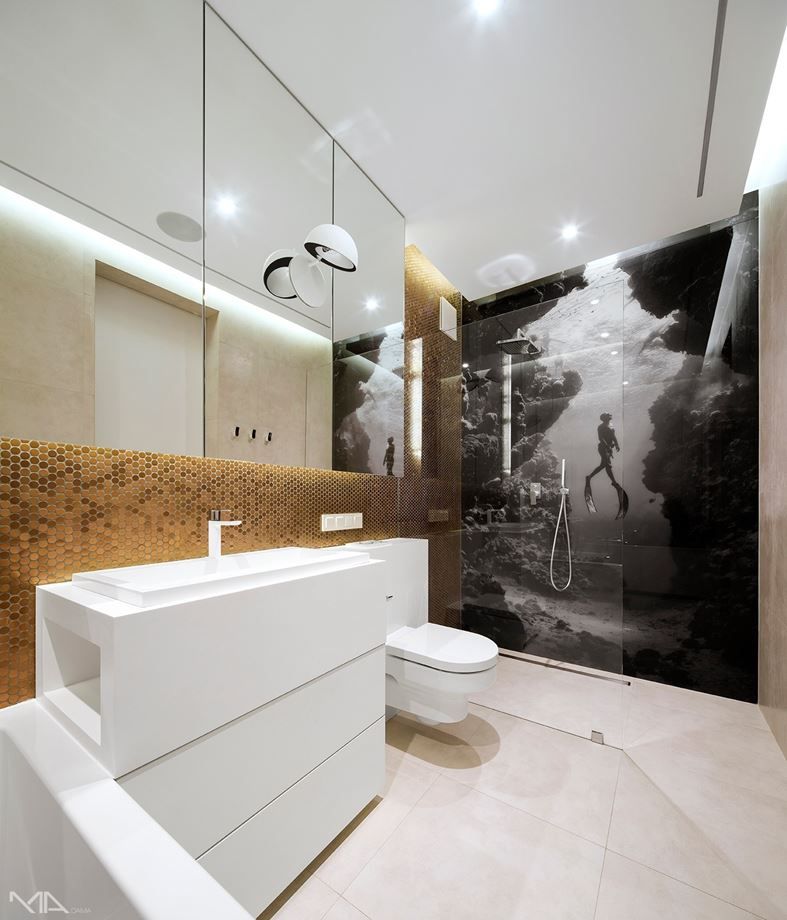 Interior design studio Madama turned the walk-in shower of this bathroom into a work of art and a cool focal point which draws the attention away from the reduced proportions on the room and redirects it towards the clean and chic decor. The large mirrors play an important role as well. 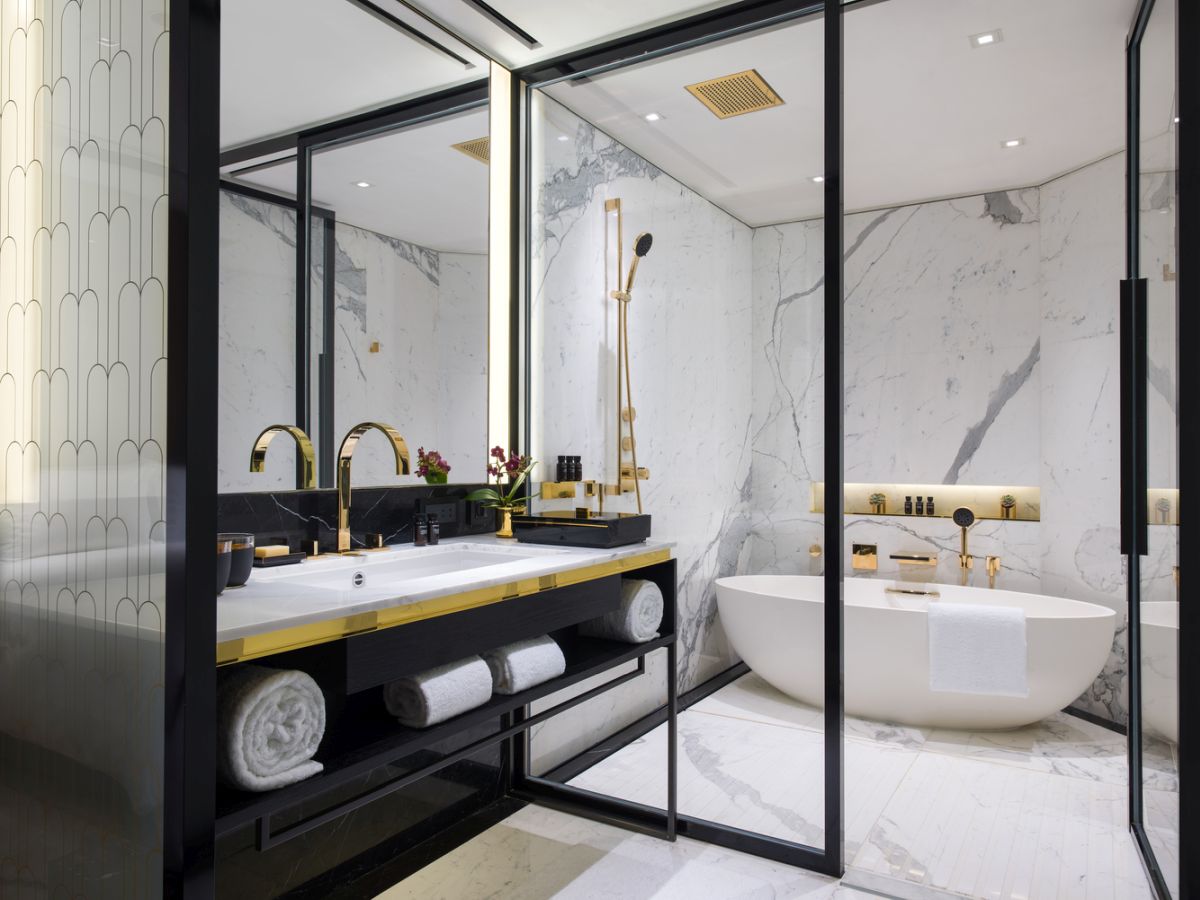 Black and white with a touch a gold – a beautiful combination which does this bathroom justice. The white marble walls and floor tiles highlight the walk-in shower in a sophisticated but at the same time subtle way. This is a design created by studio Foster + Partners and features a clear separation between the shower and the rest of the room. 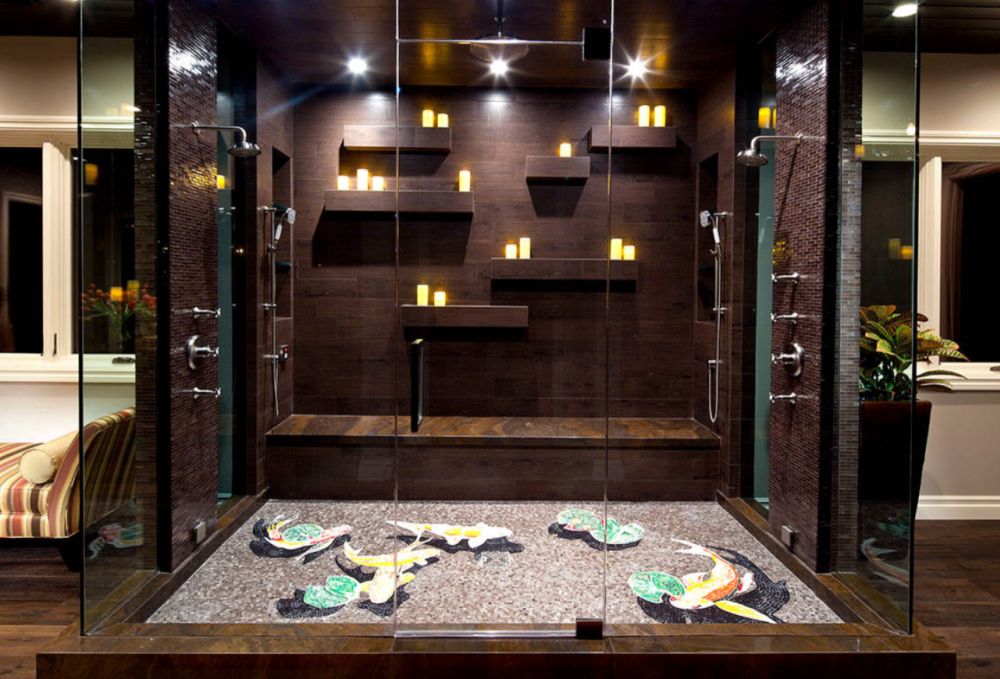 This is an example of a shower area which is its own standalone volume as opposed to part of a bathroom setup with seamlessly combined features. The flooring is the focal point, adding an artistic vibe to the space. The lighting is also very cool in this case. 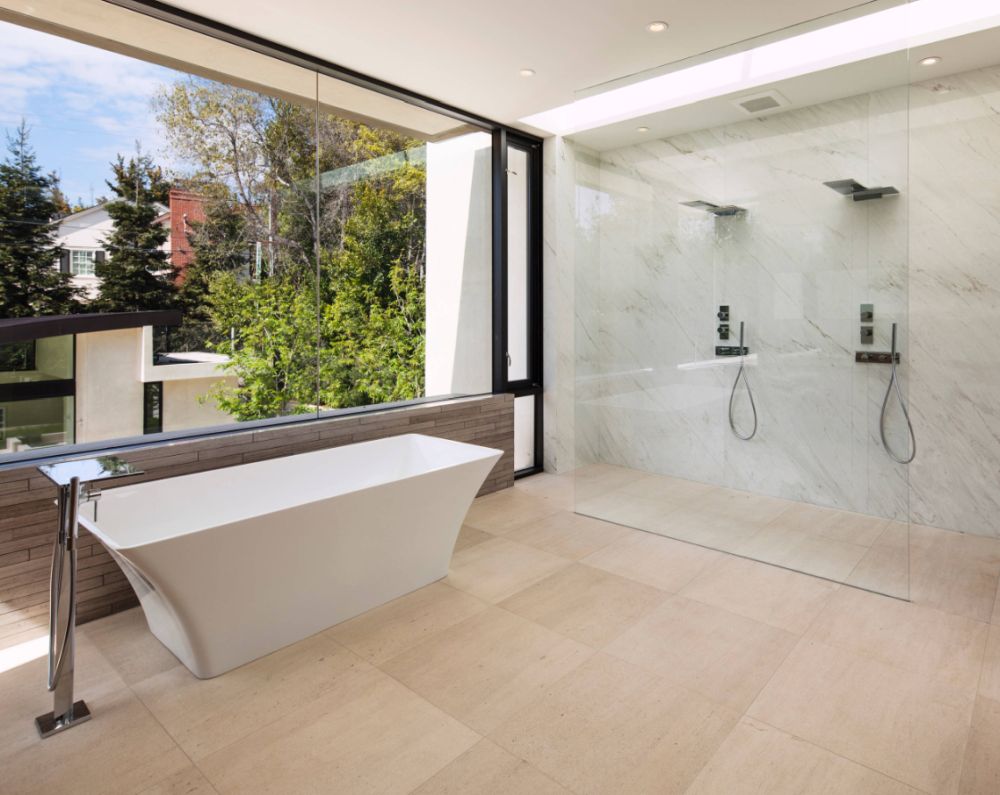 With enough space you can design your bathroom however you want. A large room doesn’t necessarily have to be filled with furniture or to have a design defined by lots of different materials, finishes and colors. Less is often more and this contemporary bathroom is a nice interpretation of the concept. 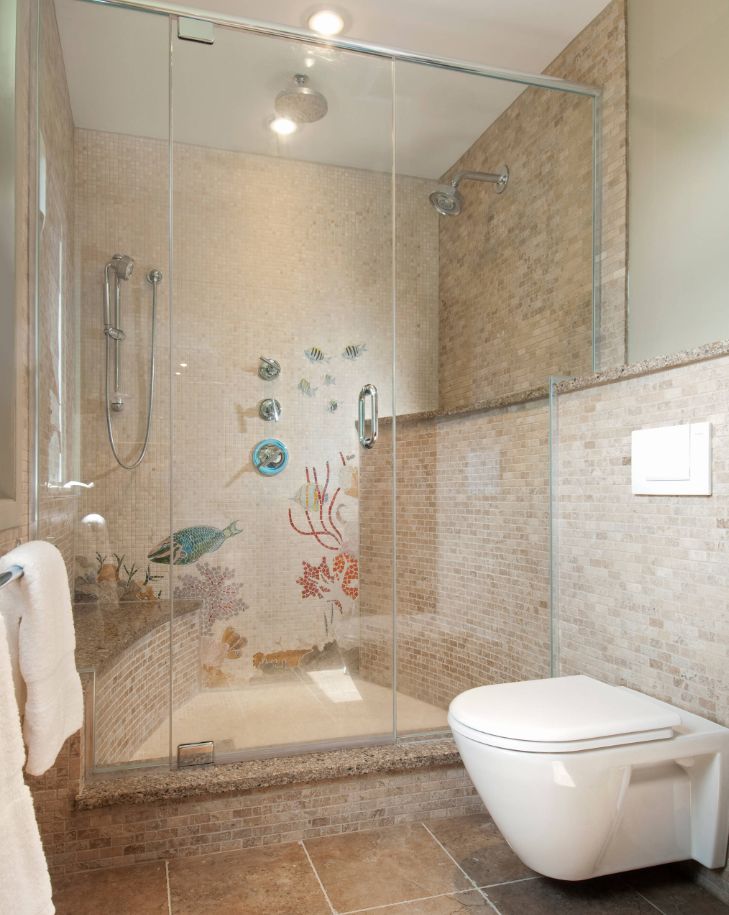 Interior design is a form of art, in its own unique way. Naturally, there are many different ways to express that, even in a small and simple space like the bathroom. This shower is a lovely example. It’s not overly complicated but not too simple either even if the colors are toned down and the materials unexceptional. This was a project completed by Design First. 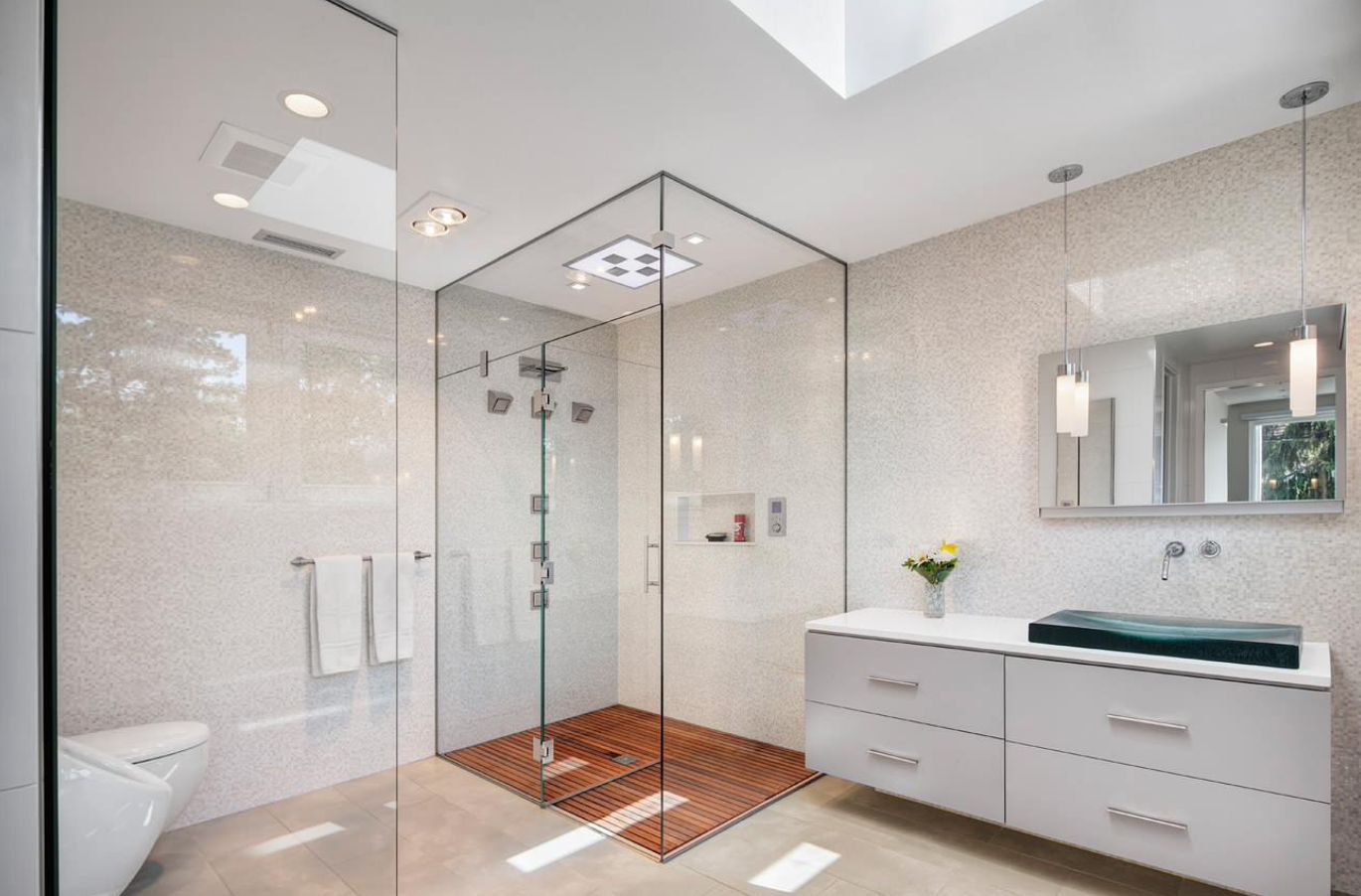 The clear glass dividers let the shower blend in seamlessly while the floor tells a different story, creating a clear distinction between the shower module and the rest of the bathroom. Overall, an interesting way to balance out the decor and to give each element character without disrupting the harmony of the space as a whole. A project completed by Becker Architects. 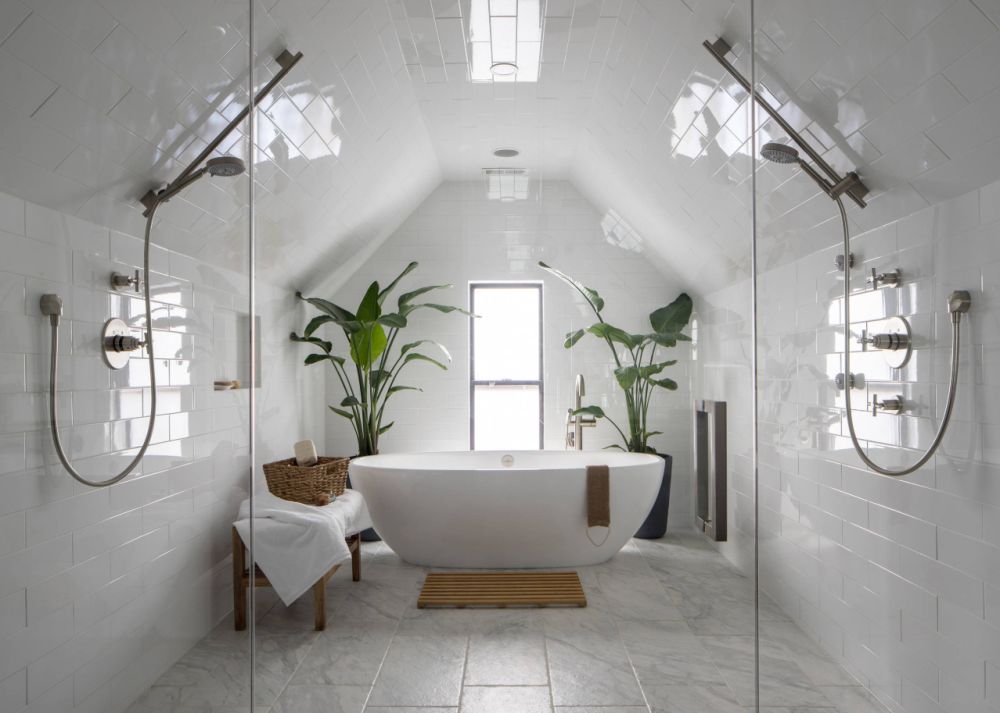 Symmetry gives comfort and creates a sense of familiarity which is a useful feature that one can take advantage of when designing a space. This bathroom has a narrow vertical window framed by plants, a freestanding tub centered in front of it and two open showers on opposite sides. This was the work of studio Design Platform. 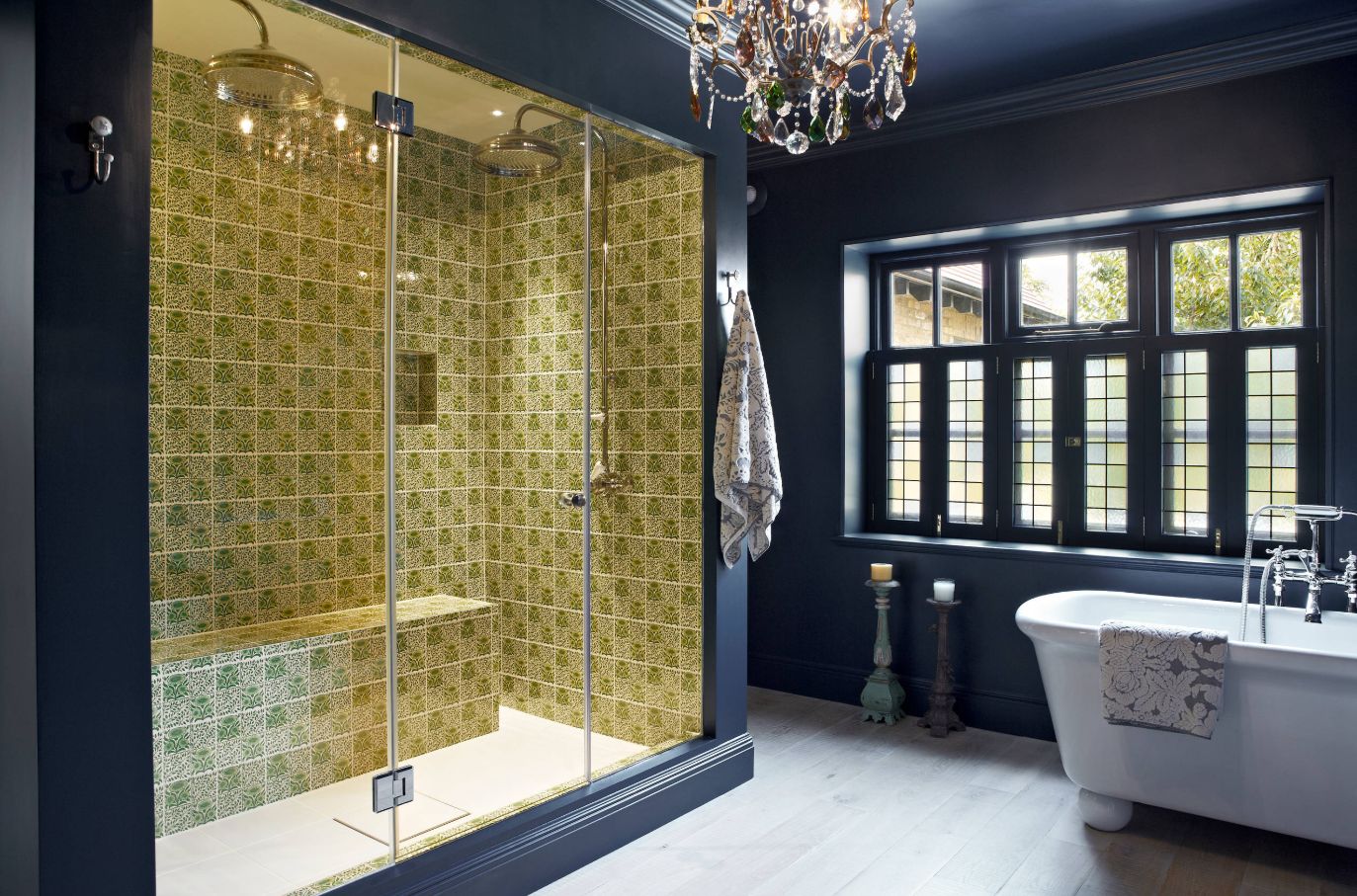 There’s definitely a certain amount of opulence in the design of this shower and the bathroom as a whole. The black walls and ceiling keep the design simple to a certain degree, allowing the patterned tiles to stand out and become the focal point of the entire room. 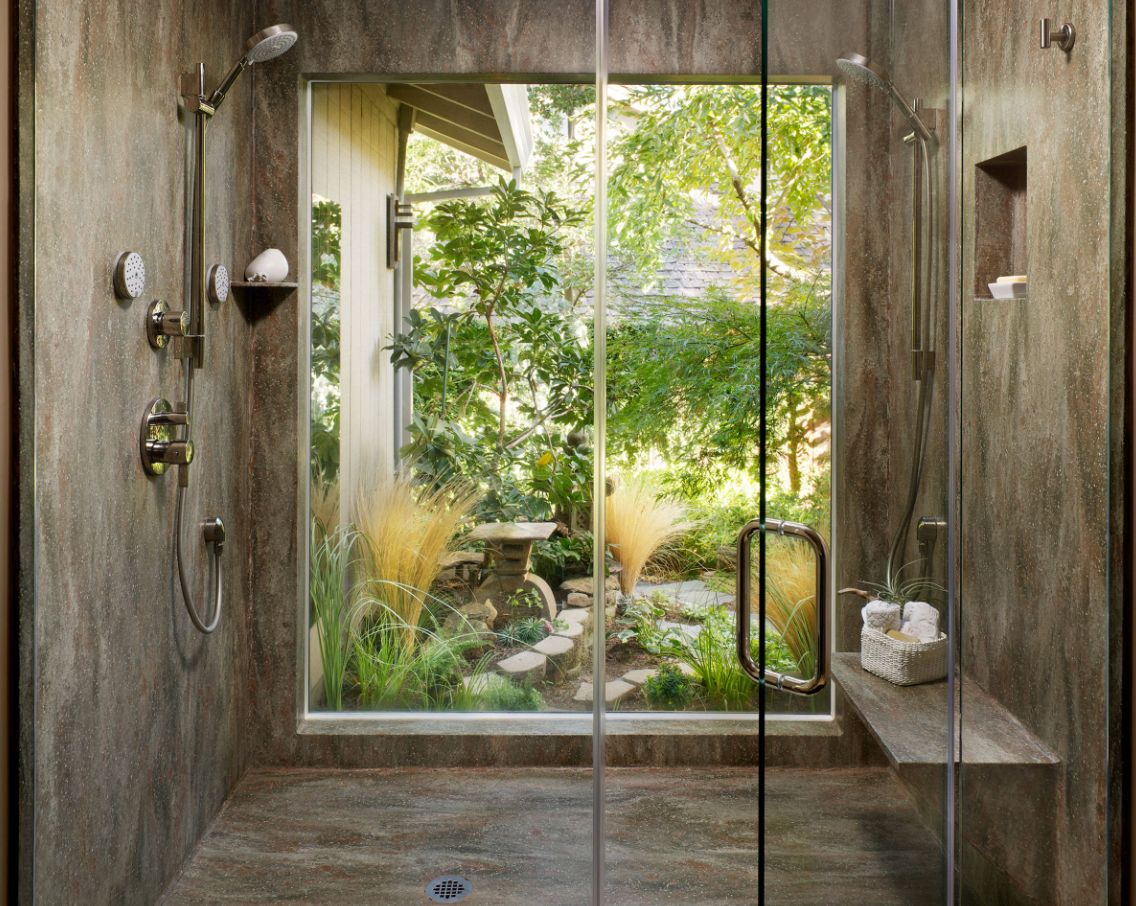 This corian shower is so amazing and yet so simple…with walls, flooring and a ceiling that match, glass doors and a huge window which adds color to the decor and lets nature enter the space in a very expressive manner. 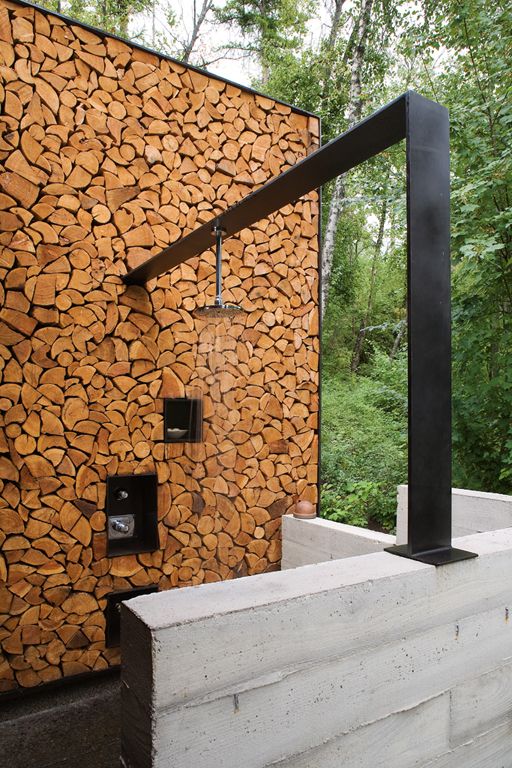 Outdoor showers may have the same function as the indoor ones but their overall design and everything that comes with it is definitely in a category of its own. In this case,  Andersson Wise Architects chose an open design with no walls or screens to frame it, not in the traditional sense at least. 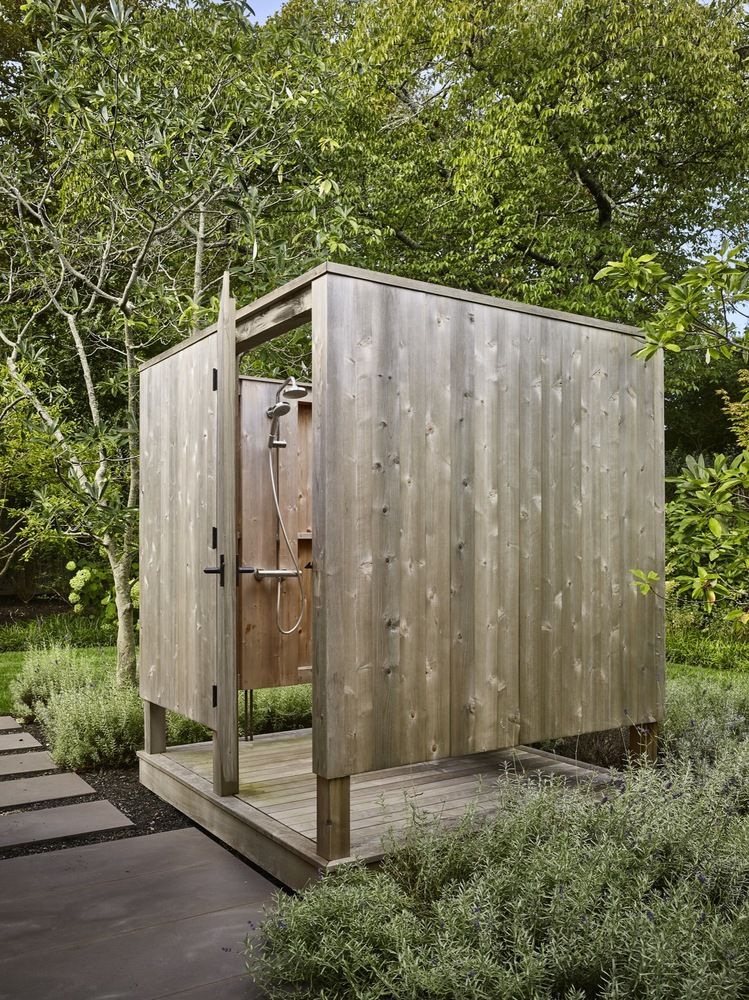 Imagine a standalone shower out in the garden, surrounded by nature, open to the sky and built out of pure and simple materials which help it enjoy an organic connection with the surroundings. That’s just what Robert Young Architects managed to offer with this design.